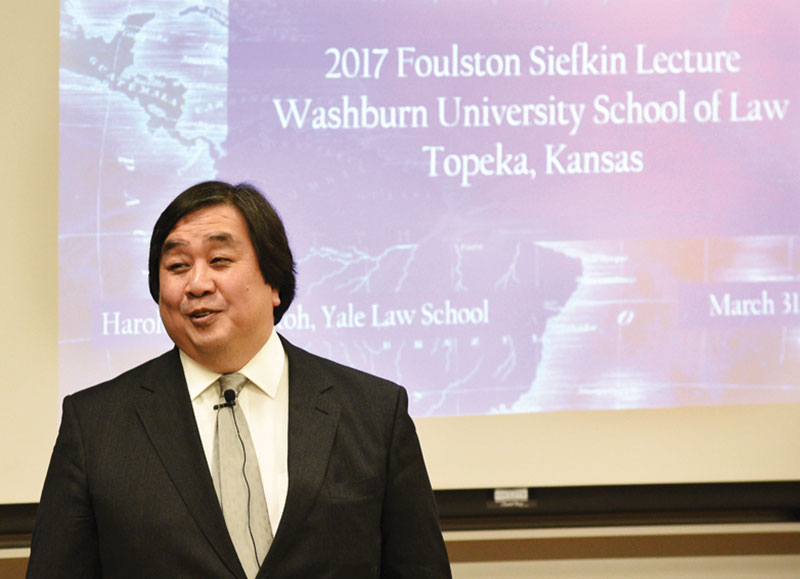 Bill Dodge focused on the “outside” component, and specifically the use of litigation, as part of the counter-strategy grounded in transnational legal process. Bill offered the cautionary insight that the use of litigation actually triggers executive interpretations of international law that are not only excessively narrow (and, one might add, sometimes at variance with traditional understanding of the law), but are indeed deeply entrenched through the internalization process. This confirms the interaction-interpretation-internalization dynamic, but not always in ways that contribute to compliance with international law.

Freddy Sourgens similarly questioned the extent to which the “stickiness” created by transnational legal process would be sufficient to enmesh a hostile Trump Administration, particularly given that, in his view, the Trump Administration is only one symptom of a more general unraveling of institutions and norms within the international legal order.

Laura Dickinson raised questions about the manner in which Harold’s approach tends to blur, or perhaps disregard, the distinction between law and policy. She used the example of the Presidential Policy Guidelines on Procedures for Approving Direct Action Against Terrorist Targets Located Outside of the United States and Areas of Active Hostilities (PPG), to great effect in exploring how a detailed set of policy “rules” serve to bridge the gap between differing interpretations of law, but also to mask the legal dimensions of the problem. The implication here is that transnational legal process may lead to problems if such policy looks like, or even substitutes for, an interpretation and internalization of law in the transnational legal process.

Kevin Heller provided a two part tour-de-force providing a retrospective and prospective critique of Harold’s arguments. In Part I, Kevin challenged the excessively black-and-white contrast drawn between Trump and Obama on compliance with international law, highlighting a number of ways in which the Obama Administration exhibited a lack of respect for international law and human rights. In Part II, Kevin provided a detailed and persuasive critique of Harold’s argument in support of the lawfulness of the use of force for purposes of unilateral humanitarian intervention (UHI), as a third exception to the prohibition in Art. 2(4) of the UN Charter. Harold argues that UHI both is and should be lawful, while Kevin is of the view that no such exception currently exists, nor would it be wise to establish one.

The Move from the Descriptive to the Normative

It strikes me that several of the issues raised seem to point towards some common tensions or even paradoxes within the argument. What is more, some of these tensions are not only in relation to the use of transnational legal process as counter-strategy, but relate to the theory of transnational legal process itself. Indeed, it may be that as we begin thinking more deeply about the theory as counter-strategy, we may stumble upon some important questions about the theory itself.

Upon reflection, I found the move made in Harold’s article both intriguing and surprising. That is, the manner in which the article apparently transformed transnational legal process from a descriptive theory into a strategy. My understanding of Harold’s famous work on transnational legal process was that the theory sought to explain why and how international law mobilized compliance. This compliance was the consequence of a complex process that operated automatically, organically, as a natural result of transnational interactions arising from the very structure and nature of the system of international law and its component parts.

Yet, as Kevin details in Part 1 of his essay, the Obama Administration acted in many ways that were inconsistent with, and indeed even inimical to, international law. But while Kevin was primarily cautioning against allowing our preoccupation with Trump to entirely eclipse any concerns over the transgressions of Obama, these inconsistencies may actually take on a greater significance in light of Harold’s argument. For when Harold speaks of the Obama administration engaging in transnational legal process of interaction–interpretation–internalization, so as to support international law and deploy it as part of American soft power, his implicit premise is that the interpretations of international law at issue were valid and legitimate, in part because previous interpretations have been valid and legitimate, and have been in turn internalized. But what if, as Kevin argues, interpretations frequently were not?

Bill has explained that litigation can sometimes force the internalization of a very narrow or constrained, and one might add possibly invalid, view of international law; Laura has explained that the articulation and interpretation of detailed rule-based policy can disguise the legal issues, and be internalized in the place of law; Kevin has detailed instances in which the Obama administration took positions that were inimical to international law. In short, interactions can lead to invalid interpretation, and the internalization of principles, norms, or legal positions that are inconsistent with established international law.

Consider one example that was referred to in Harold’s article, and which was also touched on by both Kevin and Laura – the targeted killing of suspected terrorists with drones in non-consenting states, away from traditional theatres of armed conflict. This one policy has been widely attacked as violating a wide range of well-established principles of jus ad bellum, international humanitarian law (IHL), and international human rights law. Illustrative of Laura’s insight, much is often made of how the PPG established limitations on acceptable collateral damage that were more stringent than limits required by the principle of proportionality in IHL. But this disregards, and distracts from, the key question of whether IHL applies at all. A large segment of the international community, including many American allies, reject the claim that the U.S. can be in a non-international armed conflict against “Al Qaeda, the Taliban, and associated forces,” wherever they happen to be, and thus deny that IHL can apply to the American targeted killing of individuals away from the theatre of armed conflict. And if IHL does not apply, many of these killings would flagrantly violate international human rights law and domestic criminal law.

Similarly, this use of force against non-state actors within non-consenting states requires justification under jus ad bellum. Harold in his article refers to the Obama Administration reliance upon both a “necessarily elongated” notion of imminence, and the “unwilling or unable” doctrine, for its justification of such use of force. But as Kevin notes, and many others have argued, this “elongation” of the concept of imminence actually strips it of any temporal component, and so guts a concept that is integral to the broader doctrine of self-defense. Other aspects of the unwilling or unable doctrine similarly distort the relationship between jus ad bellum and both IHL and the law of state responsibility, and excessively privileges the interests of powerful states over the rights of weak states. Ultimately, it lowers the threshold for the legitimate use of force in ways that could have important ramifications for inter-state conflict.

It is not possible to lay out the proof for these arguments here, but they will be familiar to most readers in any event. But this is merely to illustrate that there are powerful arguments, controversial though they may be, that the Obama policy on targeted killing with drones distorted and undermined well-established principles of jus ad bellum and IHL, in ways that may do serious harm to the stability of those legal regimes, for relatively narrow instrumental anti-terrorism purposes.

It is not clear to me that the there is anything inherent or internal to the process itself that helps ensure that interpretations will more often than not fall within such a reasonable range of validity. The process is explained as being “constructivist”, and is “sticky” and self-perpetuating precisely because prior valid interpretations are internalized. But that does not explain how it is self-corrective if interpretations begin to deviate from the norm. On the contrary, it seems that the validity of interpretations could depend to a significant degree upon the outlook and disposition of the actors within the administration engaged in the interpretation. Harold does suggest in his latest article that the choice of engagement over unilateralism is a feature of the theory, and this may attenuate the problem, though I am not entirely clear on how such engagement is a necessary consequence of the process. It strikes me that this issue could benefit from further explanation—specifically, the question of how transnational legal process encourages interpretations that are themselves consistent with international law.

This brings us back to Trump and the deployment of transnational legal process as counter-strategy. If transnational legal process as a theory of compliance is dependent to some degree upon the good faith motives of key actors within the system, what happens when it is confronted with something like the Trump Administration? And which is worse: a rouge administration’s utter disregard for international law, or its decision to engage in an instrumental, malicious effort to subvert and destroy it through its own process of distorted interpretations and internalizations of international law in a manner cynically designed to serve its instrumental purposes? This is reminiscent of a debate between Adrian Vermuele and David Dyzenhaus over whether black holes or gray holes are worse for the rule of law—whether a façade of legality disguising unlawful conduct may do more violence to the rule of law than outright disregard or suspension of legal principles in certain exigent circumstances.

In short, I think that in developing the article into a book, Harold could perhaps explain further the implications of the move from descriptive theory to counter-strategy, and explore more deeply the question of how transnational legal process ensures interpretations and internalizations that conform with established international law. None of this detracts from the importance of Harold’s project—to the contrary. His explanation of the threats posed by the Trump Administration, and what is at stake for the international rule of law, and indeed the global world order, is compelling. His call to arms is rousing, his optimism is encouraging, and his offer of a counter-strategy is promising. I hope that this symposium will contribute to a conversation that may continue to inform Harold’s development of what is sure to be an important book.