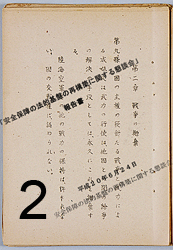 Japan’s Diet (legislature) passed a new Basic Law on Space on May 21 (the bill can be found in the index on-line here, and in pdf here ), which will permit Japan for the first time

to use space for the purposes of contributing to national security. This constituted a marked departure from an almost 40 year old policy of strict non-military use of outer space.

While the passing of the law received some passing coverage in the Western press , the significance of this development remains largely unexplored. The move is important in two respects – the first being its place in a systematic widening of the scope of Japanese military activity notwithstanding constitutional constraints, and the second is the extent to which it may contribute to an escalation in the militarization of space among East Asian countries. This article focuses on the first aspect.

To put all of this into context one has to begin with the Japanese constitutional constraints on the use of force and maintenance of armaments. Article 9 of the 1947 Constitution provides that Japan forever renounces war and the threat or use of armed force for the purposes of settling international disputes. It also, in Art. 9(2), declares that it shall never maintain land, sea, or air forces or any other war potential, and that the rights of belligerency will not be recognized.

As it stands now, the government (meaning the executive branch, the Cabinet) has to have specific legislation passed by the Diet, such as the Anti-Terrorism Special Measures Law (the ATSML), to obtain the required legal authority to deploy troops outside of Japan. A new law is required each and every time the government wants to dispatch the Self-Defense Forces (SDF), whether for the purpose of U.N. peacekeeping or to provide humanitarian support for collective security operations such as those in Afghanistan.