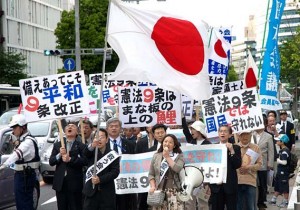 The pressure is mounting to either amend Article 9, the war-renouncing provision of Japan’s Constitution, or to increasingly disregard it and so make it irrelevant. In April the Liberal Democratic Party (LDP) published its proposal for amending the Constitution, and the dangers it posed for Article 9 was analyzed here on June 6 (“LDP’s dangerous proposals for amending antiwar article”). But the response to such amendment proposals by the supporters of Article 9 continues to be one of complete denial — that is, a categorical argument that Article 9 should not be amended at all.

This position is misguided. There are both strategic and legal reasons why the left must develop realistic alternative amendment proposals that would preserve and strengthen the core elements of the provision, but eliminate those elements that undermine it. In a chapter in the book “A Time for Change? Japan’s ‘Peace’ Constitution at 65,” published last month by the Woodrow Wilson Center for International Scholars (the chapter is available online: http://bit.ly/MWGF8T), I explain why Article 9 should be amended, and provide draft language that can serve as a basis for beginning a discussion on alternate amendment proposals.

Flat out rejection of any and all possible amendments to Article 9 is dangerous as a strategic matter. The national security environment of Japan has shifted in the last couple of decades, with the emergence of a nuclear-armed North Korea, and the growing military strength of China. In addition to these perceived threats, there is an increasing sense that Japan should be doing more to fulfill its international responsibilities. Moreover, the Japanese Self-Defense Force (SDF) has participated in non-combat roles in such conflicts as Afghanistan and Iraq with no adverse consequences. … Read more…

The Moscow round in the talks with Iran over its nuclear program, in which the world powers are ultimately trying to prevent Iran from developing nuclear weapons, collapsed last month. The next round of talks are scheduled to begin soon. This has renewed claims that further talk is futile and harsher measures are required, and counter-arguments that diplomacy is failing precisely because the U.S. refuses to make reasonable and necessary concessions in the negotiations.

One of the central issues in this debate is whether the U.S. should “permit” Iran to enrich uranium for non-military purposes. Israel and its supporters in Congress have pressed for a categorical “red-line” in the negotiations, according to which Iran should be prohibited permanently from any enrichment whatsoever. Others have responded with powerful policy and strategic reasonswhy, on the contrary, a “concession” to acknowledge Iran’s right to develop a peaceful nuclear program, is necessary for there to be any meaningful chance of success in the negotiations. Past U.S. policy has, of course, been that Iran has the right to peaceful nuclear energy development, and the proposed red-line would be a departure from past policy.

The claims against Iran are, of course, framed largely in legal terms — and there should, therefore, be a careful consideration of the legal principles that relate to this central issue of Iranian enrichment. And an analysis of the law suggests that a U.S. failure to acknowledge Iran’s right to peaceful enrichment would not only be unprincipled and perhaps unwise, but it would be fundamentally inconsistent with the governing legal regime – the legal regime that is the foundation for our objection to Iran’s program to in the first place. … Read more…

And yet the absence of any public discussion or analysis of the legal issues raised by America’s efforts against terrorism is striking. Whether it be torture and extraordinary rendition, military commissions, the targeted killing by drone attacks in Pakistan, the planning of CIA assassination squads, the large number of civilian deaths in air strikes in Afghanistan, or even the prospect of military strikes in Iran, all of these raise significant and complex international law issues. But you will not find any meaningful discussion of those issues in the media, or indeed in the talking points, blogs, or analysis produced by most liberal or progressive organizations. … Read more…

The debate over climate change legislation is beginning to heat up. The American Clean Energy and Security Act was passed by the House and is now before the Senate. The debate on this issue typically takes the form of environmental concerns about global warming pitted against economic fears about the cost of reducing greenhouse gases. It is often framed in left-right terms. But as Americans think about whether to support this legislation, they should ponder the national security implications of climate change.

The recognition that global warming will increase the threats to our national security and place ever greater demands on our military is not new. The Bush administration acknowledged the issue in the 2006 National Security Strategy. A national security think tank comprising retired military officers, including Marine General Anthony Zinni, issued a report on the subject in 2007, identifying the various ways in which man-made climate change will directly affect national security. … Read more…