It was announced just today that five more detainees were released from Guantanamo Bay, some 6 years after they were cleared for release by an inter-agency review, and as much as 13 years after they were initially detained. The majority of detainees still at Guantanamo Bay are not terrorists affiliated with al-Qaeda or any other terrorist organization, and of course have not been charged with any crime. But Republicans want to ensure their continued and indefinite detention. … Read more… 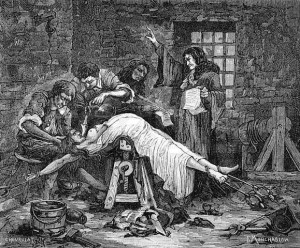 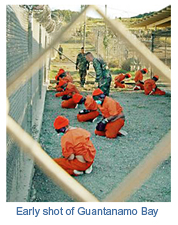 Omar Khadr was 15 years old when he was captured by U.S. forces in Afghanistan in July, 2002. He was one of the few detainees who has been arraigned and who is actually moving towards a trial before the much-disputed Military Commissions in Guantanamo Bay. He has been charged with murder and with conspiracy to commit other acts of murder and terrorism. The murder charge arises from the death of a U.S. soldier during the skirmish in which he was captured. … Read more…

An article in The New York Times on Sunday described how recent letters to Congress from the Department of Justice (DoJ) explain that the government reserves the right to decide on a case-by-case basis what interrogation methods would violate international law standards against mistreatment of detainees. Specifically, the letters from the DoJ state that where harsher interrogation measures are “undertaken to prevent a threatened terrorist attack, rather than for the purpose of humiliation or abuse” then such measures could be determined to be not “outrageous” or otherwise in violation of international standards. … Read more…