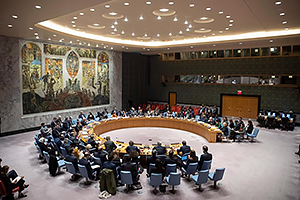 Joe Clark addressed the General Assembly on September 28. There had been some drama surrounding the final edits to his speech, and many of us were anxious about how it would be delivered and received. The chamber was packed. To my bewilderment, before he was halfway through his speech people began getting up from the national desks and gathering at the front of the chamber and along the sides of the two isles that angled towards the podium. At first, I mistook this to be a disrespectful lack of interest.

By the time Clark had finished there seemed to be more people standing than sitting—and his conclusion was greeted with a thunderous ovation, with most people now on their feet applauding Joe. As he tried to make his way off the dais, the crowd pressed in with people wanting to shake his hand and pat him on the back. Part of the crowd—all diplomats and government officials from other countries, mind you—moved with Joe Clark as he headed back to the Canada desk. This was extraordinary, and I was astonished.

This rock-star treatment reflected the stature Canada then enjoyed, particularly among the Non-Aligned Movement, comprising the countries of the global South. It was partially in response to the Mulroney government’s strong and leading role in condemning apartheid in South Africa. But it was also due to Canada’s role as “honest broker” in any number of other ways, a reputation established with Lester Pearson’s role in the development of UN peacekeeping during the Suez Crisis of 1956. Canada’s policies and positions throughout the latter half of the Twentieth Century, regardless of which party was in power, reflected an enduring respect for human rights (indeed, Canadian John Peters Humphrey had helped draft the Universal Declaration of Human Rights in 1948), generous support for foreign aid and development, assistance for refugees, upholding multilateralism and global cooperation, and perhaps most important of all, championing the centrality of an international rule of law.

This influence was not only enjoyed in relation to the Global South. Canada chaired an informal but important forum in the margins of the First Committee (first called the Barton Group after Canadian Ambassador to the UN William Barton, but later called the Mason Group after Peggy Mason, the Ambassador for Disarmament for whom I worked in 1989), composed of NATO countries plus Japan, Australia, New Zealand, and Ireland (a country with no security arrangement with the U.S.). It served as an important forum for informal discussion of common positions on security and disarmament issues. In short, Canada helped facilitate multilateral solutions to global problems.

Canada departed from its traditional approach toward international affairs under the conservative government of Stephen Harper. This was demonstrated most obviously in Canada’s lurch towards unquestioning support for Israel’s right-wing government and disregard for the plight of the Palestinians. But it was also reflected in Canada’s disregard for China’s human rights record in the rush for trade cooperation, the supply of arms to Saudi Arabia, withdrawing from the Kyoto Protocol, boycotting several UN body proceedings, and generally creating the widely shared perception that all foreign affairs policy was driven entirely by local electoral politics.

Canada’s failure to secure a Security Council seat last month merely highlights the obvious—Canada is not back. Not yet. While Mr. Trudeau’s words have helped restore some luster to Canada’s reputation on a superficial level, his actions have not made sufficient headway on a substantive level. Canada has failed to condemn the looming Israeli annexation of parts of the West Bank, which is clearly unlawful and will doom any prospect of a Palestinian state. Canada continues to sell arms to Saudi Arabia, which is committing systemic war crimes and crimes against humanity in Yemen. Canada talks the talk but refuses to walk the walk on climate change, and is now among the world’s worst offenders.

Canada should return to its foreign policy roots, as a champion of human rights, a principled honest broker that facilitates multilateral cooperation within a rules-based order, and a guardian of the international rule of law. These principles align with our own Charter values, and respect for democracy and the rule of law—values that, according to various surveys and studies, have come to define who we are as a people. What is more, while adhering to these principles sometimes required short-term costs, in the long run they gained Canada a disproportionate influence in the world. The stature and influence Canada once enjoyed translated into concrete benefits in our foreign relations. The point is not that stature or a security council seat is an end in itself, but that policies earning such stature would also be more consistent with Canada’s values, and would advance Canada’s interests over the long term.

This is not to say, of course, that Canada always adhered to such principles in the “good old days.” In December 1989, just as I was leaving New York, the Canadian government was deep in debate over what position Canada would take in the Security Council over the American invasion of Panama. While the invasion was clearly unlawful, Canada put interests before principle and stood by its ally. But these were the exceptions that proved the rule, and it was the rule that earned Canada the stature it enjoyed.

On the evening that Joe Clark addressed the General Assembly in September 1989, the Montreal Symphony Orchestra assembled in the General Assembly chamber. The Governor General of Canada, the Right Honourable Jeanne Sauvé, was hosting a reception in celebration of Canada assuming the Presidency of the Security Council. As the champagne flowed and diplomats discussed the end of the Cold War, the strains of Ravel’s Bolero slowly swelled to fill the chamber. The symbolism was lost on no one—a piece of music that begins with only a few quiet instruments, and mounts to a glorious crescendo as each instrument joins in, a beautiful whole far greater than the sum of its parts, it epitomizes the power of cooperation and coordination. And here was a Canadian conductor facilitating it all. It is indeed time to bring Canada back.