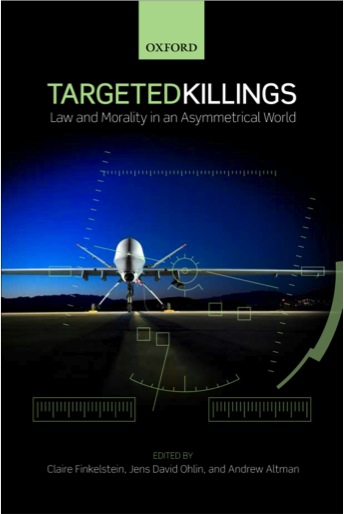 Jens Ohlin’s chapter in Targeted Killings, “Targeting Co-Belligerents,” provides an important analysis of one of the key questions in the targeted killing debate, and makes a persuasive argument in favor of one possible response to it. In doing so, however, I wonder if it leaves another fundamental question hanging, which I lay out below for him to address. First, however, let me provide a sketch of his argument.

Jens begins by noting how the US targeted killing policy, and the transnational terrorism against which it is directed, raises difficult questions regarding which legal regime should be controlling. Not only is there an ongoing debate as to whether responses to terrorism should be governed by domestic criminal law within a law enforcement paradigm, or public international law in the context of armed conflict, but even for those who accept the armed conflict paradigm there are debates over whether the principles of jus ad bellum or jus in bello are best suited to justify the targeted killing.

Against that backdrop, and assuming for the sake of his analysis that some targeted killing will be permissible in some circumstances, Jens addresses the question: “who can be targeted and why?” His stated objective is to investigate “the tension between national security and civil liberties through a distinctive framework: what linking principle can be used to connect the targeted individual with the collective group that represents the security threat?” As he explains, regardless of whether one approaches the problem from a jus in bello or a jus ad bellum perspective, the problem of linking the individual targeted to some collective is an essential step in the justification process.

Jens proceeds to explore five possible linking principles. The first is the “direct participation in an armed conflict,” drawn from well established if not well-defined principle of “direct participation in hostilities” in Additional Protocol I to the Geneva Conventions. The second is “co-belligerency under the law of neutrality,” which is application of the principles of co-belligerency that apply to states under the law of neutrality in jus ad bellum, to individuals and terrorist organizations. Third is “military membership,” which is an extension of the jus in bello principle of combatancy to members of terrorist organizations. Fourth is “control,” derived from the principles of “effective control” established by the ICJ on the one hand, and “overall control” from the ICTY on the other. Fifth is “complicity and conspiracy,” drawn from domestic criminal law.

The chapter then embarks on an analysis of these principles, with the objective of determining which might be optimal, within the context of the tension between civil liberties and national security. With his typical precision and clarity Jens walks the reader through a comparative evaluation that leads almost inexorably to the conclusion that a membership principle modified to include functional criteria would be best. The proposed principle would be something between co-belligerency, and membership in a military organization – based on voluntary and self-declared membership in an organization engaged in armed conflict with the United States.

This “functional membership” principle would be the linking principle that best combines the self-applying and public aspects of the jus in bello rules, resolves the temporal problems inherent in the “for such time” aspect of the “direct participation in hostilities” principle, and is a status-based proxy that in a meaningful way reflects the conduct of the individual. In concluding, Jens argues that this linking principle will, counter-intuitively, provide greater protections to the targets than would the criminal law principles of complicity and conspiracy.

As reasonable as all this sounds, I wonder if it leaves important questions unanswered. It stands to reason that in a work this short some issues will be ignored, and some vulnerabilities left undefended. For instance, in jus ad bellum terms, the linking of the terrorist organization to the harboring state is far more important than linking the individual to the organization (an issue with which I grapple in my chapter). But what seems to me to be the most important question left open by Jens’ chapter is the one with which he started – which is the right paradigm?

While acknowledging that there remains this debate about the applicability of an armed conflict or a law enforcement paradigm to govern responses to terrorist threats, the chapter tends to embrace the armed conflict model without answering the question. In justifying the importance of a linking principle the argument is limited to jus ad bellum and jus in bello considerations, and throughout there is the underlying acceptance that the conduct is occurring on a notional field of battle within an armed conflict. The assumption is reflected too in the five candidate linking principles – four of the five are drawn from jus in bello or jus ad bellum, and the one that is drawn from criminal law is not applied in a manner that would conform to the law enforcement model.

The chapter does accurately outline some of the problems inherent in the US claim that it is in an armed conflict with terrorist organizations. And indeed, whether the US is in an armed conflict with Al Qaeda, the Taliban, and associated forces, is one of the foundational question in the targeted killing debate. The Obama administration keeps asserting it, without actually explaining it. The ICRC among other institutions, has rejected the proposition. But while Jens acknowledges the question, his argument seems to simply accept the armed conflict paradigm as an assumption. Moreover, while assuming this key premise, the conclusion is then used to suggest that the armed conflict paradigm is more consistent with protecting the rights of the targets. The analysis is elegant and persuasive in so far as it goes, but it left me wondering – what if the assumption is wrong? What if, as a matter of international law, the US is not in an armed conflict with AQAP?

Jens’ response can be found here.